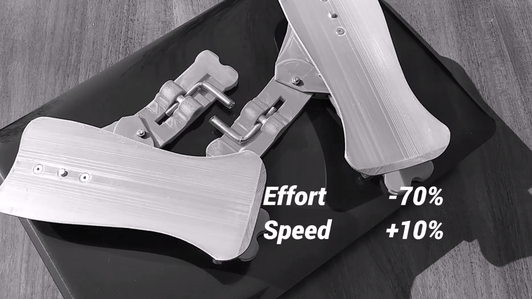 The speed of writing depends above all on the mental ability of the writer. However, the fact of being easier to reach the keys certainly affects the writing times. In addition, the convenient position that allows the weight of the arm to be unloaded on the device, and the active position of the hand above the keys fatigue much less than the writer, increasing its performance. Based on the tests done, an increase of around 10% was found.
​The device supports the natural movements of the arms. In the state of the art, devices focused on replicating human physiology with rotation at the elbow and at the same time supporting the forearm are not known.
Finally it is observed that the use of the device creates a pleasant state of writing, and as many know, when one feels pleasure fatigue and work are less evident, and at the same time one becomes more experienced. 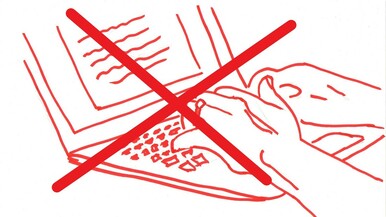 It is difficult to concentrate in a short time the various ways of writing to the PC, both with the laptop and with the keyboard.
However, they can be grouped in three ways.

The first way is to place a portion of the palm on the part in front of the keyboard, and move accordingly. Web videos show incredibly fast people. However, the movement of the wrist is rather limited, without forgetting that some PC have their own hard disk in that area and this causes an annoying sensation of heat on the wrist and hand. Clearly this device overcomes this limit giving ample freedom of movement to the wrist. 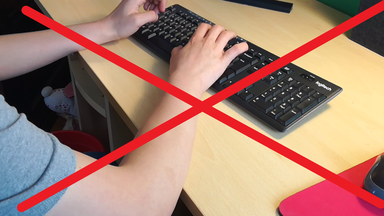 The second way is to place the forearm at the edge of the table.
It is a very common method, practicable and not, based on the height of the tables. Working this way is a bit annoying and anyway a certain effort is required.
With Fast write, instead, you have the possibility to replicate this way of writing, but with greater possibility of movement (rotation at the height of the elbow), and greater comfort (no annoying edges).

The third way of writing is the one, unusual, of resting the elbow on the table (or similar) and keeping the forearm raised, reach over the keyboard to quickly type in the keys. Fatigue and stress are assured, and it is difficult to sustain this way in the long run.
The device on the other hand allows you to replicate this mode of writing, but without difficulty. Everything is more natural.
In summary, the device has been designed to make the hand and wrist area free of movement, and at the same time unload the weight of the upper limbs avoiding inappropriate musculoskeletal tensions.
​​ 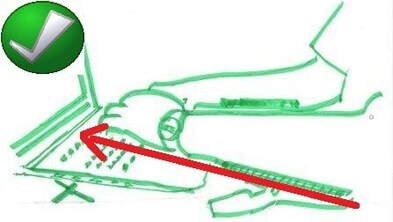 Fast write has two ways of being employed.
​
The first and fastest is to place it over the table, and behave accordingly. The brackets are opened to make the device stable, the tilt height is adjusted to your liking, and you can sit down.
Initially during the research, we tried to make the heights at the elbow level as small as possible, but then we realized that it was not so decisive, this allowed us to use a bearing useful for the rotation of greater strength, ensuring a quality of the product that we hope will be very, very long lasting.
The positioning on the table ensures micro-displacements with the elbow that improve its function. The material (ABS) with which the device is made, intentionally, does not friction with the table and therefore in addition to having a rotary movement of the forearm holding plate, there are also small movements (if desired) forwards and backwards of the device.
From the analyzes made, during the experimentation, we have seen that someone remains almost motionless with his arm, while someone else prefers to "readjust" the position from time to time. 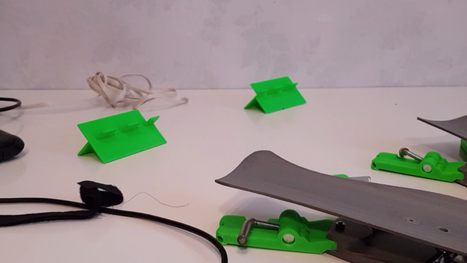 This position, comfortable and easy, allows you to have and place useful sheets for your needs.
The "fast write" braces are supplied with 4 plastic blades, which easily assembled become risers for the laptops allowing an inclination of the relative keypad so as to be aligned with the hand movement area.
Our mothers washed the dishes for a very long time and when the dishwasher appeared several were against and thought it was a useless thing. After some time, now that you have become accustomed to this appliance, in case of failure you immediately feel the lack and you understand that you could not do without it. The analogy also works for this tool. Who ever started using it in the event of his absence perceives the annoying inconvenience. You reader who have come this far and is interested in this product, try to imagine your computer work with a tool that makes you move easily with your hand over the keyboard. It is really another way to work at the PC. 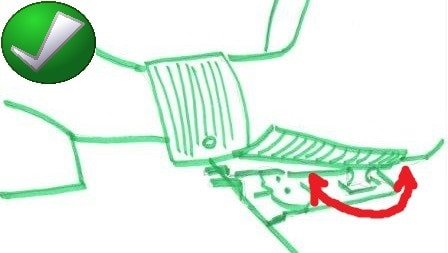 The second way of using is to attach the device to the edge of the table.
For this necessity, clamps have been studied that are hidden. They have a curved screw that, when brought to the right thickness of the work surface, allows insertion and fixing to it. The part of the screw in contact with the table was covered with a transparent rubber to protect it. The thickness of the table must not exceed 3.5 cm because the length of the screw does not allow it, in addition to the fact that one would work with an inclination too accentuated with respect to the plane of the keyboard.
The choice of this type of use also depends on the height of the table and chair. Many ergonomics manuals suggest an upright position of the operator.
The choice of this mode of use depends on the user's preferences.
In the event that the table is short and has little space to rest the forearms, this mode becomes almost a necessity, because its use becomes an extension of the work surface. 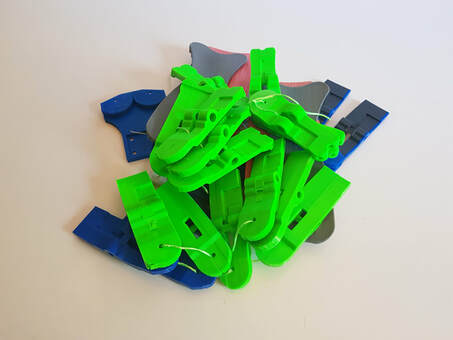 The construction material in contact with the body is made of plastic called ABS. It is the one used, to understand the Lego bricks. A safe material. Perhaps, later on, the wood can be used but in this case it is clear, that "fast write" would become a strictly personal object. The plastic allows suitable cleaning, resistance to stress, lightness. All at an affordable price. The metal elements are made of slightly oversized bearings (but it is better that way), because until now they have not shown signs of structural failure. At the beginning of the use of "Fast write" it is advisable to lubricate the bearing with 2-3 drops of Svitol (or other lubricant), because you might notice some stiffness, which in a short time will disappear with the simple use.
Most of the screws are made of steel. A particular cylindrical bolt is present in the brackets, it is functional to activate or deactivate the terminals.
....
Privacy policy eng
Cookie policy eng